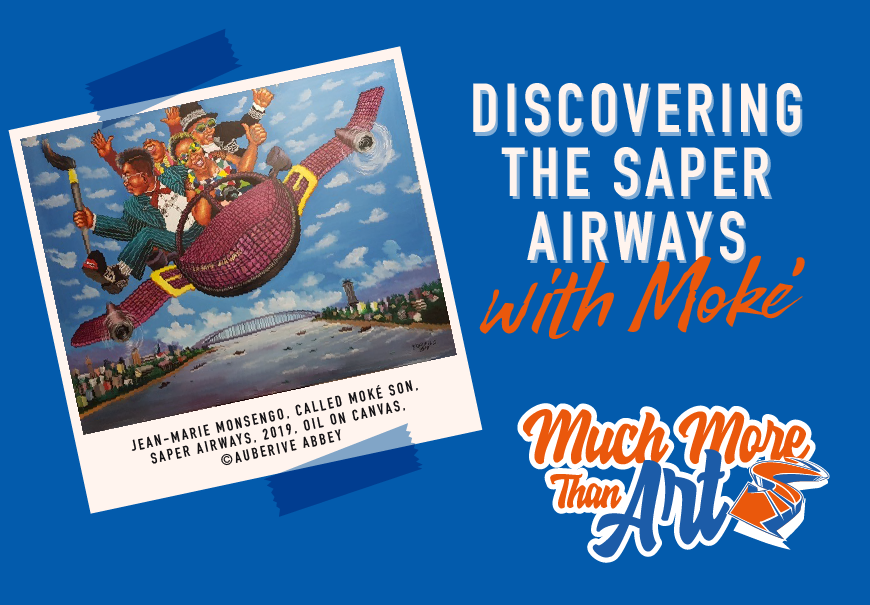 Jean-Marie Monsengwo is a contemporary Congolese artist born in 1968 in Kinshasa. Signing his work as MOKE fils, he is the son of Monsengwo Kejwamfi, who is known as Moké (1950 – 2001), and who, along with others such as Chéri Samba and Chéri Chérin, was a painter recognized in his country for developing a popular style of painting that represents everyday life in the Congo.

MOKE fils’ work is fully in keeping with this heritage. His style is to use bright and brilliant colors, his figures are free from an academic research for proportion, his idea being to bring to life the spirit of place, and portraying society with all its joys and its faults. He has thus become known as the leading proponent of “kinoiseries”, which is synonymous with the joviality, annoyances and accidental excesses of life in Kinshasa. All this is accompanied by an acuity which does not hesitate to denounce the political and social failings of Africa and its relations with the West. 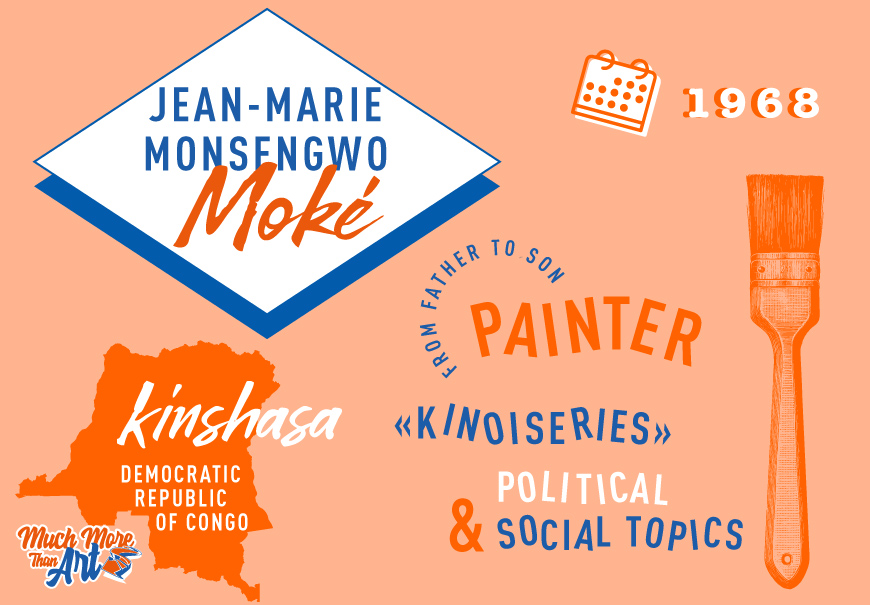 The theme of this particular work is light and joyful. Five accomplices fly over a wide river separating two cities linked by a bridge. They are sitting in a stylized airplane belonging to an airline called “La Sape Airways”. The characters are very stylish, elegantly and colorfully dressed, smiling and relaxed, clearly enjoying the flight. The plane is as much a shoe as it is a purse, with its wings in the form of straps. The artist is there himself, with his striped suit, his brush in his hand, and his black shoes monogrammed MF for Moké fils.

But what is SAPE? Acronym for Société des Ambianceurs et des Personnes Elégantes, it is a cultural movement uniting the two Congos. It manifests as a certain dandyism that references the dress codes and the manners of the colonial past, while reinterpreting them with a taste for luxurious accessories, color and an obsession with appearances. The movement was started at the beginning of the 20th century by European domestic servants who desired to imitate the dress style of their bosses in order to integrate better. It was brought back into fashion as an assertion of a certain social success, then took on a political aspect, notably in opposition to the power of Mobutu (Dictator in the DRC from 1965 to 1997) whose regime, until 1991, had imposed upon young people the wearing of a uniform. This uniform was called abacost, which signified “down with the suit”, and was made of a Congolese fabric without collar or tie, as these were claimed to be signs of submission to colonial culture. SAPE adherents were at that time seen as agitators, thugs, and derogatorily called “Parisians”. 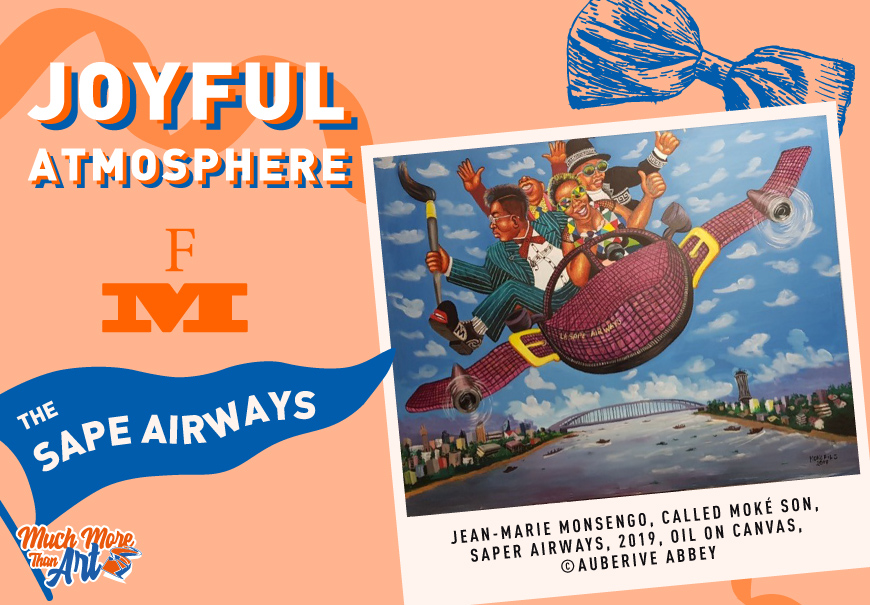 Here the plane with our “sapers” is flying over a big river separating two big cities. This is undoubtedly the Congo River since it separates the two geographically closest capitals in the world; Brazzaville (Republic of Congo) and Kinshasa (Democratic Republic of Congo), at only 4 km distance!

On the left of the painting, Kinshasa with the very recognizable Tower of Limete built in reinforced concrete between 1970 and 1974, and 210 meters high. On the right is Brazzaville with the Nabemba office tower, the tallest tower in the Republic of Congo at 106 meters, inaugurated in 1990. 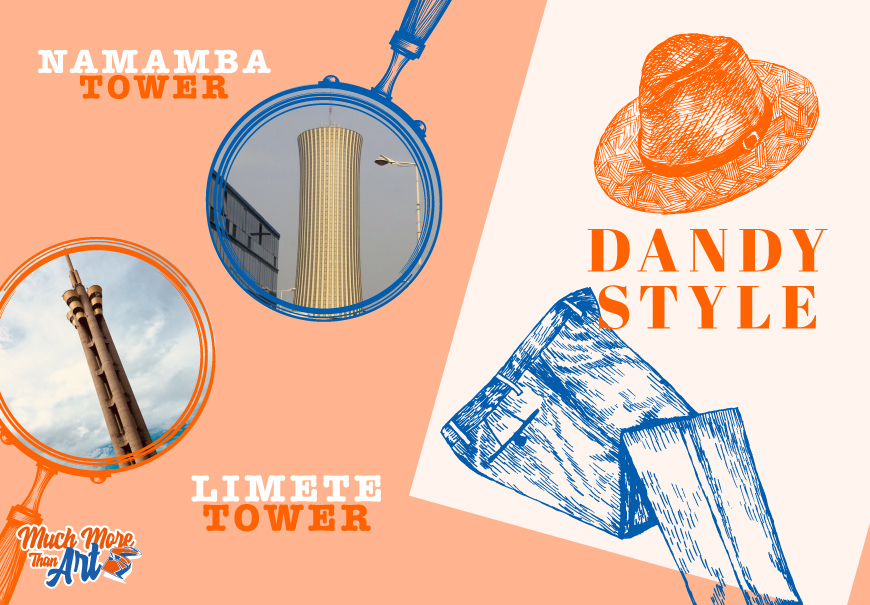 On the river we see ferries shuttling people from one capital to the other, but also an empty bridge…. which doesn’t exist yet! In fact, this very old project, launched as early as the colonial period, has never been realized, its failure over the years has been the fault of one or the other of the two countries. Six hundred million dollars, raised by the African Development Bank and its financing platform for infrastructure (Africa 50), should allow from August 2020 the construction of a 2 km road-rail structure downstream of the two main cities, finally fulfilling an old dream: to connect 12 million Kinois to 2 million Brazzavillians.

Meanwhile, the “Sape Airways” plane flies over the still separated Congo, spreading the cool attitude of Sapology to the world … 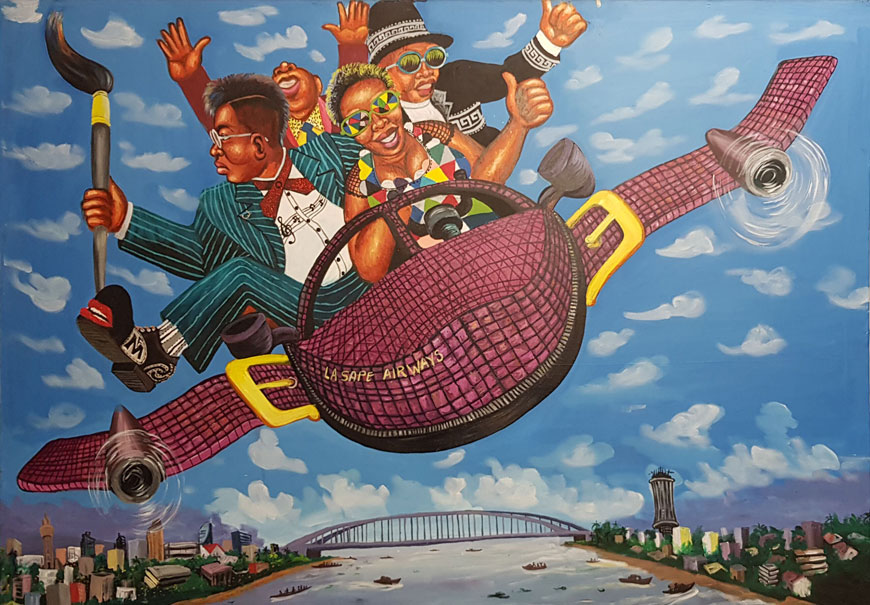 DISCOVERING THE SAPER AIRWAYS WITH MOKE //